The infusion can be defined as “Administration of fluids or medications into the blood through the veins”. When the drug delivery exceeds 15 minutes, it falls into infusion. Each hour of infusion is deemed a separately billable unit. Infusions can be categorized as below: 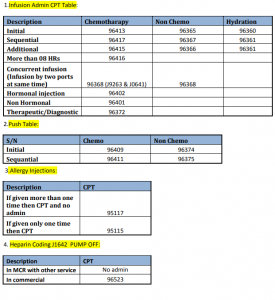 “Sequential” is when multiple drugs are getting infused “back to back” or one after the other. If a drug has already been administered to a patient through Infusion, Push, and/or Injection and another drug is required to be administered for approximately another hour, then the infusion of the second drug will be considered as Sequential Infusion.
• The “additional sequential drug” codes are used to report the second and subsequent drugs administered during a patient encounter.
• Code 96367 is used to report additionally infused therapeutic diagnostic drug and code 96417 is used to report an additionally infused drug which is to be categorized as chemotherapy administration.

“Concurrent” term is used when multiple therapeutic or diagnostic medications (not hydration fluids) are infused simultaneously through separate bags through the same IV line. If a drug is scheduled to be delivered to a Patient for an hour but after twenty minutes depending on the condition of the patient the physician plans to infuse another drug using a separate IV infusion bag during the same time span of the first drug then we have to bill concurrent hour along with the initial hour of infusion.

In order to report a concurrent administration, the drugs cannot simply be mixed in one bag; there must be more than one bags each containing a single or more drug. It is not appropriate to bill an infusion administration code for each drug that is contained within an IV bag. If more than one drug is administered in a single IV infusion bag then it should be billed as one infusion service.”

Prolonged Infusion
If a drug has to be infused for more than 8 continuous hours, then that category of infusion is known as a prolonged infusion. For prolonged infusion, generally, a special medical device is known as “Infusion Pump” is being used and likewise, we can name this infusion as “Pump Infusion”. Infusion Pumps are used to deliver very small quantities of drugs over long periods of time.

Conclusion
The above-mentioned categorization of Infusions can simplify the medical billing during the patient encounters and maximally benefit the treating physicians. The laid down criteria can go a long way in gaining patient and physician’s confidence in billing services through simplification of the processes in advance.

Pandemic may last 2 years; remdesivir approved for emergency use

Get Paid for COVID-19 Testing/Treatment of Uninsured

Practice Brief: Evolving Roles in Clinical Documentation Integrity: A Provider’s Guide to the Art of Documentation

ABOUT US
MD Facts is about Medical Billing Tips & Tricks, Physician's Documentation, Medical Coding, Insurance Plans Information, Handling of Insurance Denials, and Insurance Updates.
Contact us: billinghacks@gmail.com
FOLLOW US
DISCLAIMER: Content published or shared on MDFacts is for informational purposes. If you have any questions, kindly contact us at billinghacks@gmail.com
%d bloggers like this: